How Hong Kong office in Dubai can accelerate ties with GCC

A free trade agreement between Hong Kong and the UAE, as well as other GCC members, will be one of the prioritised tasks for the Hong Kong Economic and Trade Office (HKETO), according to its director general Damian Lee. Hong Kong chief executive Carrie Lam recently set out the government’s priorities, which included exploring the

A free trade agreement between Hong Kong and the UAE, as well as other GCC members, will be one of the prioritised tasks for the Hong Kong Economic and Trade Office (HKETO), according to its director general Damian Lee.

Lee revealed that last year, the total merchandise trade between Hong Kong and the GCC amounted to $13 billion, out of which the UAE accounted for nearly 70 percent ($9.5bn).

UAE-China trade has accelerated over the last few years as the Emirates was one of the first countries to sign onto China’s ambitious infrastructure plan, the Belt and Road Initiative.

In terms of a potential FTA, he said: “We hope that such bilateral agreements would strengthen the existing commercial ties between Hong Kong and the UAE and also other GCC countries.”

Lee was speaking ahead of the opening of the HKETO in Dubai, its first overseas office in the Middle East, which is designed to consolidate and strengthen Hong Kong’s economic and trade relations with trading partners across the GCC.

“I think it’s the right time that we set up our office in the region as we are witnessing a growing appetite for trade and other business interaction between Hong Kong and the six GCC countries,” said Lee.

Based in Dubai International Financial Centre (DIFC), the office will have a dedicated investment promotion unit to assist entrepreneurs, companies and family offices in the region to set up, retain and expand their operations in Hong Kong, as well as mainland China and Southeast Asian nations (ASEAN).

Lee highlighted that, from 2017 to 2021, there was a 70 percent increase in the number of start-ups in Hong Kong and there has been 12 unicorns – a privately held start-up company valued at over $1 billion – over this period. 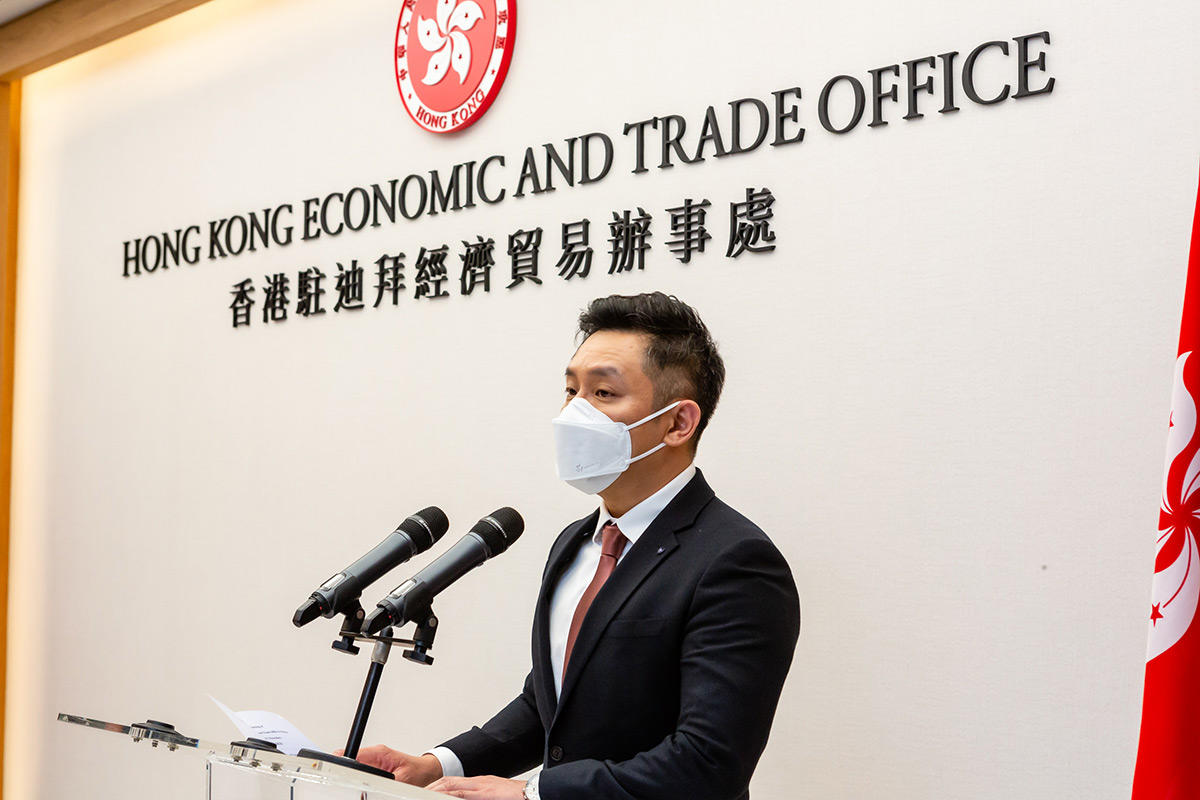 “The start-up ecosystem in Hong Kong is very vibrant,” he said.

While, in a bid to entice family offices to Hong Kong, Lam has previously declared that tax concessions would be considered.

Lee added: “One of the focuses of the government’s work for the coming year would be family offices. We hope to attract high net worth individuals. They are all encouraged to set-up family businesses in Hong Kong.”

According to Dubai Chamber of Commerce, Hong Kong has been identified as having the highest untapped potential market for jewellery products originating in the UAE, currently worth $1.1bn. Beauty, make-up and skincare is also highlighted as a potential growth sector for trade.

Lee said: “Although Hong Kong is a market of about seven million people, we are a gateway to mainland China and we also have very strong relations with other Asian countries.

“These are vast markets. Hong Kong is famous for being a logistics and trading hub for imports and re-exports to many other cities in the region.”