The world-famous wax attraction, Madame Tussauds, opened its first Gulf branch in Dubai on Thursday, the UAE’s latest tourism attraction as the country’s seeks a tourism rebound following the impact of the coronavirus pandemic.

With seven themed zones to explore and over 60 wax figures to discover, tickets costs AED135 for adults, AED110 for children while it’s free for under-3s.

Emirati athlete and Olympic weightlifter Amna Al Haddad opened the attraction alongside radio host and serial entrepreneur Kris Fade, both of whom feature inside the wax museum.

Established in London in 1835, Madame Tussauds is a global institution and the Dubai edition is the 25th internationally, bringing together handcrafted figures from the worlds of film and television, sport and science, music, history, art, pop culture, politics and more.

What to expect in Madame Tussauds Dubai

The Leaders & Royals Room, the first zone in the attraction, gives visitors the opportunity to encounter royalty, world leaders and iconic public and political figures from both past and present.

Enjoying afternoon tea with British monarch Queen Elizabeth II, meeting India’s Prime Minister Narendra Modi in the Taj Mahal and stepping on board an Airforce One replica and meeting Donald Trump are just a few of the highlights. 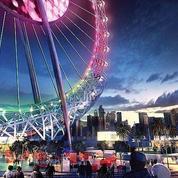 The Fashion zone is filled with a who’s who of runway icons including the queen of British style, Victoria Beckham, Cara Delevingne, Kendall and Kylie Jenner and Lebanese fashion designer Elie Saab.

Guests in the third area, the Film zone, can get up close to Audrey Hepburn for a Breakfast at Tiffany’s, join Tom Cruise in a high-octane race or scale the length of Dubai with Spider-Man.